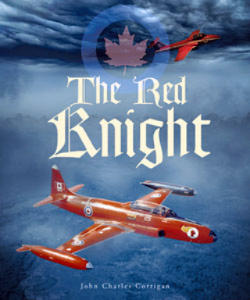 THE RED KNIGHT is the product of 25 years of meticulous research by its author. It is, arguably, the most comprehensive account ever written about the Canadian Air Force’s legendary solo jet-aerobatics performer. An important part of Canadian aviation history, the Red Knight has been somewhat overshadowed by the Air Force teams of the past and present - even though the Red Knight is second only to the Snowbirds in terms of longevity and total number of performances.

THE RED KNIGHT chronicles the history of the program, from its conception in 1957 to its cancellation in 1970. It is hoped that by reading this book Aviation enthusiasts everywhere will gain a greater awareness and appreciation of the skills and contributions made by the Canadian Air Force personnel who participated in the Red Knight program.

A publication of the highest quality, THE RED KNIGHT is illustrated with rare photographs never published before. The book is further enhanced by specially commissioned works of art from noted Canadian Aviation Artist, Don Connolly. Details of the various Red Knight paint schemes are provided through aircraft profiles, also specifically created for this publication. Together, this unique pictorial collection vividly portrays the legacy of the Red Knight.

Everyone who has enjoyed watching the precision, grace and beauty of aerobatic flight will enjoy this insight into the 'behind the scenes' aspect of aerial displays. A fine addition to any aviation reference library, THE RED KNIGHT will be of particular interest to anyone who remembers the program or saw a performance of this uniquely Canadian display.

"The Red Knight was an understated but potent emissary of the RCAF to Canadians everywhere, in communities large and small. At a time when jet powered flight was still relatively new, the high speed flash of brilliant red impressed and excited. Who knows how many dreams were awakened and ultimately realized for having witnessed a single skillful display? We remember and honour those small Red Knight teams who did so much to bring the thrill of precision aerobatic flight to the very doorsteps of so many Canadians."
~ David Kinsman, LGen (ret'd) CMM, CD (2009)

“The Red Knight pilots exhibited their skills in areas that otherwise would never have seen aerial acrobatics and no doubt encouraged other young men to follow suit."
~ Joyce Hallowell, 888 Wing RCAFA

“Each Red Knight was a fine pilot who was selected for his ability to take an aircraft and fly it safely to the edge of the flight envelope.”
~ Dan Dempsey LCol (ret’d)

“The positive publicity achieved was tremendous, and all for what was, even in those days, a very small budget. We did some ‘openers’ for the Golden Hawks, and took part in some larger Canadian and US displays, but most of our shows were in out of the way places that did not rate a Team.” "
~ Bill Fraser, 1962-1963 Red Knight

“One credible comment about the [Red Knight] program is the oft-expressed sentiment of the participants who, to a man, embraced the challenge willingly and enjoyed the adventure immensely, in the firm belief that they were performing a worthwhile service to the cause of aviation.”
~ J.E. 'Jack' Waters, LCol (Ret'd) OMM, CD, 1967 Red Knight