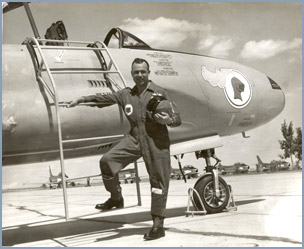 Born in Moose Jaw, Raymond Joseph Goeres grew up in Stranraer, Saskatchewan, a small rural community about 160 kilometers south and west of Saskatoon.

Ray served briefly with the Royal Canadian Artillery before enlisting in the Royal Canadian Air Force in Saskatoon on October 11, 1941. Goeres began his RCAF training at No. 2 Initial Training School (ITS) in Regina. Upon graduation from the ITS, in June of 1942, he was selected for pilot training. His next stop was No. 2 Elementary Flying Training School (EFTS) in Fort William, Ontario – now known as Thunder Bay. While at the EFTS, Goeres learned to fly the De Havilland Tiger Moth. He successfully completed this portion of his training in September of 1942. From Fort William, Goeres returned to Saskatchewan to attend No. 11 Service Flying Training School (SFTS) in Yorkton. Training at Yorkton was carried out on the Avro Anson, Cessna Crane and North American Harvard – the Anson and Crane being multi-engine trainers. Goeres graduated from the SFTS on December 30, 1942 and received his commission.

Like many members of the RCAF, Goeres served with a Royal Air Force squadron when he was sent overseas. Stationed at RAF Ludford Magna, 101 Squadron was equipped with the Avro Lancaster Bomber and specialized in a variety of Electronic Warfare (EW) roles. The Squadron’s aircraft carried the airborne VHF communications jammer known as the “Airborne Cigar”, or ABC for short. The Squadron’s role was an extremely dangerous one and, by the end of World War II, the unit had suffered the highest casually rate of any operational squadron. Goeres flew his first mission with the squadron on January 27, 1944. By June 5th, he had logged over 185 hours of flying time and completed 31 sorties.

On June 14, 1944, Goeres received the following commendation from his Superiors at 101 Squadron; “Flight Lieutenant Goeres, a Canadian, is a pilot of outstanding ability who has completed a highly successful operational tour with this squadron. With great skill and initiative he has at all times pressed home his attacks in the face of the strongest opposition, and carried out his allotted task with complete disregard for his personal safety. This officer is a great asset to the squadron, and his fine offensive spirit and unperturbed manner have been a splendid example to experienced crews. The courage and exceptional fighting qualities displayed by Flight Lieutenant Goeres are worthy of the highest praise and he is confidently recommended for an award of the Distinguished Flying Cross.” The Distinguished Flying Cross (DFC) is awarded to Officers and Warrant Officers for acts of valour, courage, or devotion to duty performed while flying in active operations against the enemy. The commendation was approved and Goeres was awarded a DFC on September 1, 1944.

After the war ended, Goeres returned to civilian life. In the late 1940s, Brisbane Aviation was an independent flight school which had the distinction of offering specific training for both pilots and aircraft engineers. The “Brisbane School”, as it was commonly referred to, operated out of the Vancouver Airport and Goeres spent six years working as an instructor there. In 1951, Goeres decided to re-enlist in the RCAF. He joined 416 Squadron and flew F-86 Sabres with the NATO Air Division for three and a half years, before returning to Canada as a Flight Instructor with No. 2 Advanced Flying School (AFS), in Portage La Prairie, Manitoba. While he was at No. 2 AFS, Goeres instructed student pilots on both piston and jet aircraft. 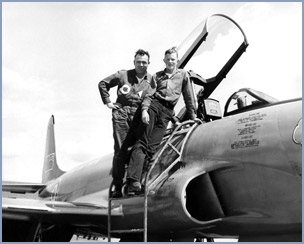 It was during this period that a unique opportunity arose, as Bob Hallowell explains; “In 1961, I had started practice for the [Red Knight air show] season but received a short-notice posting to a squadron in Germany. After watching the manure that I had to wade through to keep the show going, none of my mates wanted the job.” So, an appeal was sent out to other RCAF Training Stations for volunteers to replace Hallowell. The Red Knight was the solo, aerobatics performer of the RCAF’s Training Command. The Red Knight was commonly sent to venues considered too small for the aerobatics teams of the day. The pilots brought an extremely impressive and professional aerobatics show to communities that might not otherwise get the chance to see such an event. After the selection process was completed, Goeres was chosen as Hallowell’s replacement.

In the spring of 1961, G.W. (Pat) Patterson was a Corporal and Aircraft Refinishing Technician at RCAF Station Saskatoon. The “look” of the Red Knight’s T-33 changed dramatically that year and Patterson was the person responsible for this new design. As Pat recalls; “I remember drawing up the ‘new’ paint scheme in the evenings, at home. I submitted this idea as a ‘Suggestion Award’ and was presented a cheque for $40.00, less tax.” Shortly afterward, Patterson received a surprise visit, as he explains; “Ray Goeres, THE RED KNIGHT HIMSELF, appeared in my shop and told me that we were going aviating! We flew, (in the Red Knight T-Bird), to North West Industries in Edmonton to discuss the painting of his aircraft. At that time, I was suffering from a head cold. Ray said he would fly low, so my head wouldn't hurt. We flew to Edmonton at about 300 feet. On our return, to Saskatoon, Ray said he hoped my head hadn't been bothered and to make sure, we would go home a bit lower. "But first," Ray said, "I want to go and beat up my home town." The town consisted of a gas pump, a house or two and a grain elevator. Ray, with me in the back, put on an air show that lasted at least 15 minutes. The whole town, there must have been 20 people, stood in the street to watch. When he was finished, he found a canyon that ran between his town and Saskatoon and we flew back, inside that canyon. EXCITING!”

Between May 5th and October 10th, 1961, Ray completed 54 aerobatic displays at sites in eight Canadian Provinces, the Yukon Territories and Washington State. One of his appearances was on July 2nd at Flin Flon, Manitoba as part of their annual Trout Festival. Ed Mason, who was a teenager at the time, remembers meeting Goeres that day; “My family was spending a few days at Clearwater Lake which is just down the road from the airport at The Pas, Manitoba. The airport was used by the military during and after World War II and had a very long concrete runway and some big hangars. The Red Knight was performing a show at Flin Flon but the airport runway there was gravel and could not handle a jet, [so he operated out of The Pas instead]. I was at The Pas airport when the Red Knight arrived and I was thrilled to meet him and to have my picture taken with him on the ladder to the cockpit. I know he put on an unannounced "mini" show at The Pas airport but I can't recall if it was before or after the hop to Flin Flon."

Not every Red Knight appearance was an aerobatics display. Not every Red Knight appearance went according to plan. In the Fall of 1961, Goeres was scheduled to do a low-level pass with “smoke on” over a City Hall in Ontario to officially “blastoff” the United Fund Drive. (In those days, the drive was known as the Red Feather Campaign.) As Jack Woodhouse, the Red Knight crew chief, recalled; “Before departure from the flight line a large handful of small red feathers we placed in the speed brake area. The idea was [for Ray] to drop the speed breaks while [he was] flying down the main drag and have the feathers float down. Unfortunately, Ray forgot and only remembered to let down [the speed brakes] after his show, telling me some farmer was going to be shocked at his new crop”

The Red Knight was a note of great pride for the Goeres family, as were all of Ray's wartime, peacetime and civilian flying careers. After he retired from the RCAF, Goeres returned to commercial aviation. He flew Boeing 707s for Japan Airlines before finishing up his flying career with Cargolux. During this period, Goeres and his family had the great adventure of living in Japan, the United States and in Luxembourg – the Goeres family’s ancestral home. Goeres retired to Canmore, Alberta in 1978.

Michael Kent, a friend of Goeres for 22 years, described Ray as; “A simple, gregarious, friendly man always keenly interested in others, proud of the accomplishments of his family while diminishing his own significant contributions to his country and his community, fondly remembering his comrades in good times and bad, and, truth be told, a man who held the vodka martini in highest regard. I was always amazed at his vigour as he would walk the 18 holes at Canmore's public course two to three times a week. This he did throughout his retirement until arthritis and age forced him to abandon both pastimes in his early 80s. His daughter, Brenda, even got him out skiing once or twice when he was well into his seventies.

“Ray was a skilled and talented artist specializing in caricatures and watercolours. Unfortunately, for the rest of us, he didn't devote much serious time to this and his output is limited to just a few pieces. He tried a brief career as a realtor at the nadir of the housing market in Alberta and put his artistic skills to work at the sign shop in Banff National Park, but mostly spent time puttering about, volunteering for this activity or that organization. He and [his wife,] Sylvia would travel several times a year to various reunions, his wartime and postwar squadrons. One time, about ten years ago, he got a call from some former colleagues at Cargolux who invited him up to Edmonton, on a whim (a four hour drive), for a few toasts. They then hijacked him on their leg to Seattle, allowing him the controls of the 747 between takeoff and landing, abandoning him in the U.S. and continuing on their merry way leaving him to his own devices to get back to Canada. For Ray, this was just another day.

“In 2001, at 78 he headed for France, by himself, for a reunion, then off to Ireland for another reunion - all without any pre-planning. Just get on the plane and go and hope for the best! All was fine until he had to return... September 11th, 2001! He was forced to stay a further week living off the good wishes and hospitality of strangers. That was Ray, always trusting in his fellow man, ready to celebrate and loyal to his comrades past. He remained dedicated to his Air Force history, attending reunions and celebrations as recently as 2005 and as far away as France and Ireland. Due to his health, 2006 was the first year he did not attend local Remembrance Day parades and functions.”