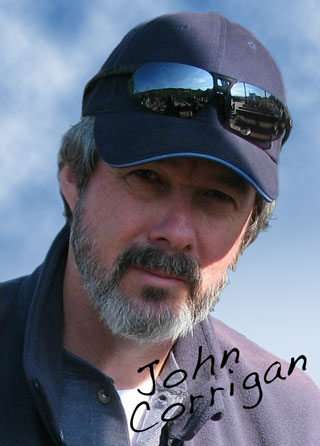 JOHN CORRIGAN was born in Oshawa, Ont, in 1955. Raised in Whitby, Ont, John graduated from Durham College as a Mechanical Technologist in 1978. Shortly after graduation, he found employment with Dowty Equipment of Canada, in Ajax, Ont. Now known as Safran Landing Systems, the company manufactures landing gears and hydraulic systems for military and civilian aircraft. John has worked in Inspection, Quality Control and Quality Assurance. He retired as the Quality Systems Manager at the Ajax site in 2014. In his spare time, John works as a freelance journalist, writing articles for Airforce Magazine and the Journal of the Canadian Aviation Historical Society, among others.

John's interest in aviation has been lifelong. As a boy, he and his twin brother would ride their bicycles to the airport in Oshawa to watch the planes come and go and to crawl through an old Lancaster and Swordfish that were parked there during the 1960’s. Working summers on his Grandfather's farm near Trenton, Ont, John would watch the Yukon and Hercules aircraft that flew constantly overhead. It was during one of these summers that he went for his first flight, taking off from the grass covered field at Oak Hills, near Stirling, Ont, in a bright red Champion Citibra.

A collector of aviation art, John became interested in the Red Knight's story after purchasing the Don Connolly print, "From Stage Right, The Red Knight." When he tried to find background information about the Red Knight, John was disappointed at how little there was. What information he did find was incomplete or contradictory. John decided that the Red Knight was an important part of Canadian aviation history, so he began his quest to learn more.

Since the spring of 1993, John has been all over Canada researching the story of the Red Knight. With the assistance and understanding of his wife Donna, John has travelled from St. John’s, NL, to Vancouver Island interviewing former Red Knight personnel and related technical contacts. Aided greatly by the co-operation and generosity former Red Knight pilots and support personnel, John has collected numerous photographs, newspaper articles and personal memorabilia to preserve the history of this uniquely Canadian solo-aerobatic display.

THE RED KNIGHT is the author’s first book. John believes that it is the most comprehensive effort on this subject to date and hopes that all aviation enthusiasts will enjoy reading it.