THE RED KNIGHT Returns to Canada By John Corrigan 2004©

This article originally appeared in the Fall 2004 issue of Airforce Magazine.

The 12th annual Canadian Aviation Expo was held on June 18th, 19th and 20th at the Oshawa, Ontario. The feature attraction at this year’s show was the return of the Red Knight to Canada. The Red Knight was the solo, aerobatics performer of the Royal Canadian Air Force’s Training Command from 1958 through 1969. The appearance at Oshawa was the first in 41 years.

The Red Knight made one previous appearance at the Oshawa Municipal Airport on June 15, 1963. The occasion was the 8th Annual Flyorama, a combination air show and fly-in breakfast. Back then; the Red Knight took second billing to Cole Palen's WW1 air show.

The RCAF Red Knight was commonly sent to venues considered too small for the aerobatics teams of the day. The 17 pilots, who flew as the RCAF Red Knight, brought an extremely impressive and professional aerobatics show to communities that might not otherwise get the chance to see such an event. The trademark of the Red Knight was his brilliant red aircraft, first the T-33 “Silver Star” and then, for the last two seasons, the CL-41 “Tutor”.

The unique feature of the Red Knight displays was that all the maneuvers were performed within the boundaries of the airfield - keeping the action in view of the spectators throughout the entire show. Although originally authorized to perform only three shows, the Red Knight went on to make over six hundred appearances.

Pilot/Owner Chris Rounds is proudly continuing the legacy of the Red Knight by bringing this beautiful and history rich aircraft to audiences across North America. Until Chris purchased the plane in June of 2003 and moved it to his home in McMinnville, Tennessee, the T-Bird had been in a hangar in Houston for a decade.

The previous owner, the late Rick Brickert, had the plane on the air show circuit in the early 1990’s until his death 1993. Chris has brought the plane back for the 2004 season and has already taken the Red Knight to several air shows in the US this year, much to the delight of the audiences.

As a special treat for the crowd in attendance at the Canadian Aviation Expo on Saturday, June 19th, former RCAF Red Knight Jack Waters joined Chris. The two pilots talked about the flight characteristics of the T-33 and Chris gave Jack a tour of the updated cockpit. The finer points of performing a solo jet aerobatics display and the logistics of how Waters’ was able to perform more than 100 displays during Canada’s Centennial year were also discussed. The men took time to autographed souvenirs for spectators, while they chatted.

Many visitors returned to the Expo on Sunday afternoon to watch the Red Knight’s departure. Shortly after 3 pm, a tow motor pushed the Canadair built T-33 back onto the ramp. The aircraft was re-fuelled under the watchful of the owner. A start cart was used to power up the big red bird.

After taxiing to the eastern end of the main runway, Chris applied power to the Rolls Royce Nene 10 engine, the red jet roared down the runway and took off.

Once airborne, it circled back to the airfield to make four “low and over” passes. For much of the time that the aircraft was up over the airfield, the distinctive wingtip smoke generators were activitated. Before departing into the western sky, Chris waggled his wings to wave goodbye to the crowd. 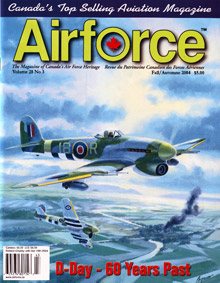 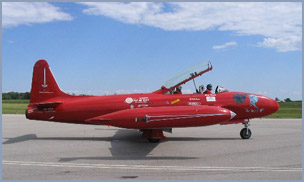 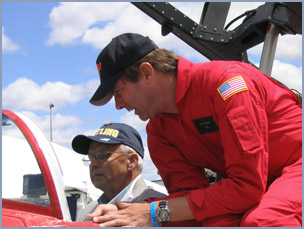