This article originally appeared in the 2005 issue of Airspeed – the magazine of the Canadian International Air Show. 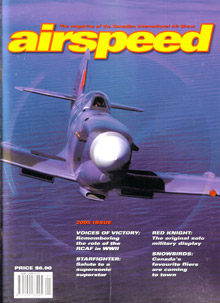 A solo, aerobatics performer of the Royal Canadian Air Force’s Training Command from 1958 through 1969, the role of the Red Knight was actually shared by 17 different pilots over a period of 12 seasons. Although originally authorized to perform only three shows, the Red Knight went on to make over six hundred appearances, all over North America. The Red Knight was commonly sent to venues considered too small for the aerobatics teams of the day. According to 1963 Red Knight, Bill Fraser: “As with the Teams, the positive publicity achieved was tremendous, and all for what was, even in those days, a very small budget. We did some ‘openers’ for the Golden Hawks, and took part in some larger Canadian and US displays, but most of our shows [took place] in out of the way places that did not rate a Team.”

The Red Knight was uniquely Canadian - a solo military display. These pilots, with the help of their Crew Chiefs and support personnel, brought an extremely impressive and professional aerobatics show to communities that might not otherwise get the chance to see such an event. The trademark of the Red Knight was his brilliant red aircraft; first the T-33 “Silver Star” and then, for the last two seasons, the CL-41 “Tutor”.

The unique feature of the Red Knight displays was that all the manoeuvres were performed within the boundaries of the airfield - keeping the action in view of the spectators throughout the entire show.

Roy Windover, a native of Belleville, Ont, was the first Red Knight. Windover was a Flight Instructor at Central Flying School (CFS), in Trenton. During the Labour Day weekend that year, he attended the Canadian International Air Show (CIAS) at the Canadian National Exhibition (CNE) in Toronto. A spectator at the show, Windover was disappointed to see an American exchange pilot flying an RCAF jet in a solo aerobatics display at Canada’s premier air show. Roy vowed to himself that he would be the pilot flying that display at the 1958 Air Show.

As luck would have it, one of Roy’s students back at CFS was Air Vice Marshall (A/V/M) Bryans, the AOC of Training Command, who was renewing his green ticket at the time. Windover lobbied his case to the A/V/M and was granted permission to begin practicing a solo aerobatics display. His first performance was at the Air Force Day celebrations in Trenton on June 14th, 1958. The show went well and Roy continued practicing for his CIAS appearance in September. In preparation for these shows, his aircraft (T-33 S/N 21057) was painted dayglo-red, to make it more visible to the audiences. On July 12th, a photo session was arranged to get publicity pictures for the air show programs and press releases. The photographer, Cpl. George D. Hardy, commented during the shoot that the brilliant red aircraft reminded him of Baron von Richthofen, the Red Knight of Germany, and so the act was dubbed as “The Red Knight”.

Windover performed two shows at the CNE, September 4th and 5th, and received critical acclaim from the press.

The 1961 season was significant for the changes it brought to the Red Knight program. By the spring of that year, Bob Hallowell had already begun preparing for his third season. A second T-33 aircraft, serial number 21574, had been acquired and was to serve as a spare, in case of mechanical problems. Both aircraft had been re-painted and featured a distinctive new emblem displayed prominently on the nose. The red Knight’s helmet with the flowing yellow plume on a white, circular background was to become the official emblem of the Red Knight for the remainder of the program.

The number of performances increased again, in 1962, to 74 aerobatics displays. Dave Barker flew 66 shows, while Bill Fraser flew another eight displays as Alternate. One notable development of the 1962 season was the introduction of the coordinated show - not technically considered formation flying, both Red Knight aircraft performed the same manoeuvres, at the same time and in the same direction, while maintaining a minimum separation of 1,000 feet.

The 12-year history of the Red Knight has remained for the most part, untold. Perhaps that is due to the very nature of the program. Members of the team participated for a year or two and then moved on. The base of operations changed six times during the twelve seasons - the longest period at any one base being just over three years. This lack of information seems rather sad for what should be an important part of RCAF/CAF history. Undoubtedly, many of today’s pilots were inspired to pursue careers in aviation after seeing a performance of the “Red Knight”.
THE RED KNIGHT
Canada's Legendary Solo Jet-Aerobatics Performer
By Canadian Author John Corrigan ©
CONTACT JOHN